I had the idea to create mixtapes, real, vinyl-to-tape, analog, lift-and-drop-the-needle, mixtapes, for my friends during a drive back from Montana after Thanksgiving. There’s something lost in the digital music era, where every song of every album from every artist is available at any moment at a click of a button. The ability to create a digital playlist, to be able to listen, reorder, or swap songs at a whim is convenient, it loses what drew me to vinyl in the first place, a purposefulness and intention to music.

Don’t get me wrong. I love digital music. A friend and I even created an early digital music service we called Digital Mixtape where you could create mixtapes out of your MP3s and send them to your friends. I love the access and the ease of use, but it’s the exact opposite of purposefulness and intention. Listening to my running playlist from my watch to my bluetooth headphones during a race, or exploring Dolby Atmos experiences from my living room couch is fantastic. These are amazing technological wonders that enable me to bring music to anywhere and at a higher quality (there, I’ve said it) than vinyl or certainly cassette tapes ever could.

So, what’s the deal with this mixtape?

The idea started out as a bit of a throwaway. I thought it’d be fun to create some tapes and send them to friends and say “hey, remember when we used to do this? Crazy huh?” Over the course of the next two months that idea grew and developed taking me on twisting turns and down paths I’ve never explored. First I will tell you the story of creating the mixtapes, then how I learned to love these two analog formats even more.

It started, like many harebrained ideas, on Amazon. Nobody has tapes anymore, nobody even has a way of playing tapes anymore. First problem to be solved, send everybody a tape and a tape player. I decided on this Semier tape player which promised to “Slow down the pace. Enjoy the present life.” Perfect. The idea was to connect my record player directly to the tape player via the the microphone jack. Then once I had a “master” I could copy from tape to tape by connecting one tape player to another. 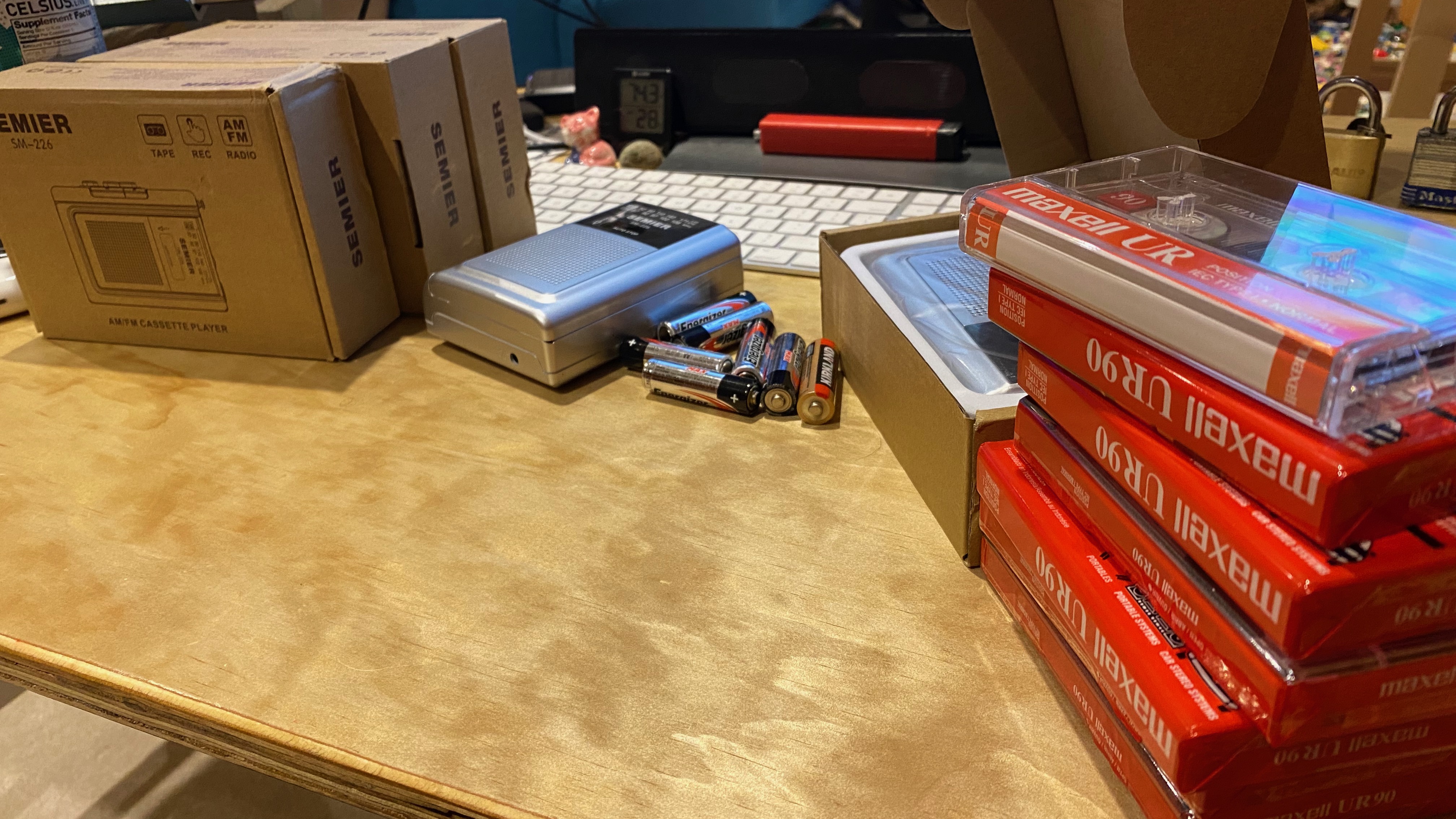 The package with the tape players and tapes arrived and I excitedly tore into them. I set up the system and started to record. After the first song was done I went back to check the recording and levels. I was disappointed to find everything was terribly clipped. I must have the input levels too high, after quite a bit of tweaking and tuning I simply could not get the levels correct. I did some research online and learned that ‘line-in’ is not the same as ‘microphone-in.’ The line-in expects a powered signal and microphone-in does not. That means that microphone-in has a bit of extra electronics to bump the signal, great if you have a $5 lapel mic, not what I can produce from my mixing board.

No problem, I’ll just buy a used tape deck from Goodwill, there must be a ton of them there, right? No. Literally nobody cares about tape players anymore, not even enough to have a real second hand market for them. Tape decks have transitioned from old gear everybody has laying around and nobody wants, to the vintage collectors item. Searching eBay and Craigslist both turned up similar results.

But wait! I found a tape deck for $20 in “near perfect condition” just an hour away. I quickly responded to the ad and drove over after work. As I pulled up the nice man said “I just want to be totally clear before you buy this, it’s not working. Do you still want it?” Well, no, I thought I don’t need parts, I need a working tape deck! We talked a bit more and I convinced myself I might be able to repair it myself. I had already driven an hour to get this thing, what’s an extra $20. I took the broken tape deck home. 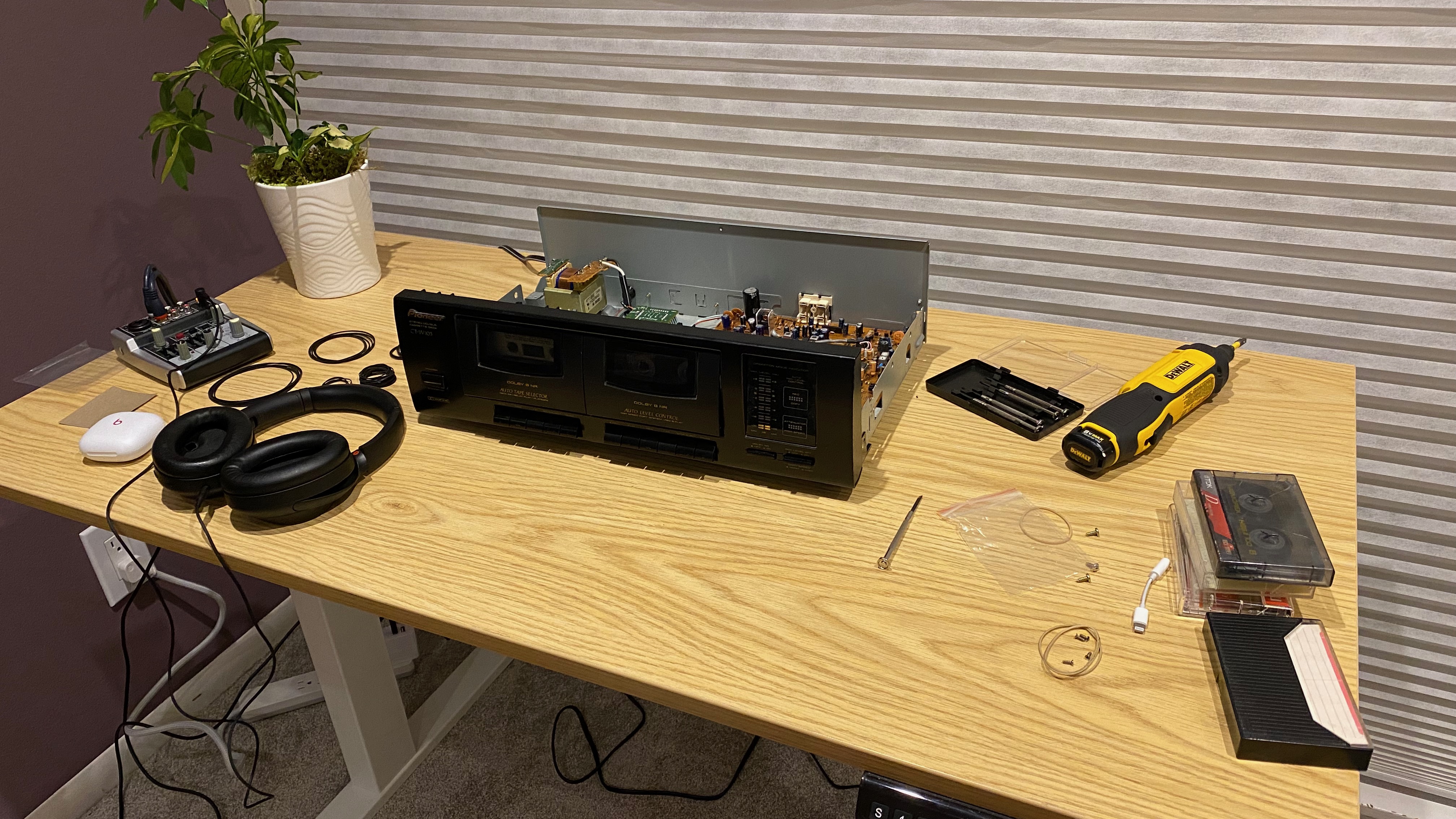 At home I open up the deck. The problem is obvious and seems straight forward to fix. The 30 year old tape belts have literally disintegrated. They’ve returned to their original crude oil state. I use a scraper to remove the gunk and replace them with something I think will work, a rubber band. I stretch the rubber band around the pulley wheels, pop in a tape and hit play. 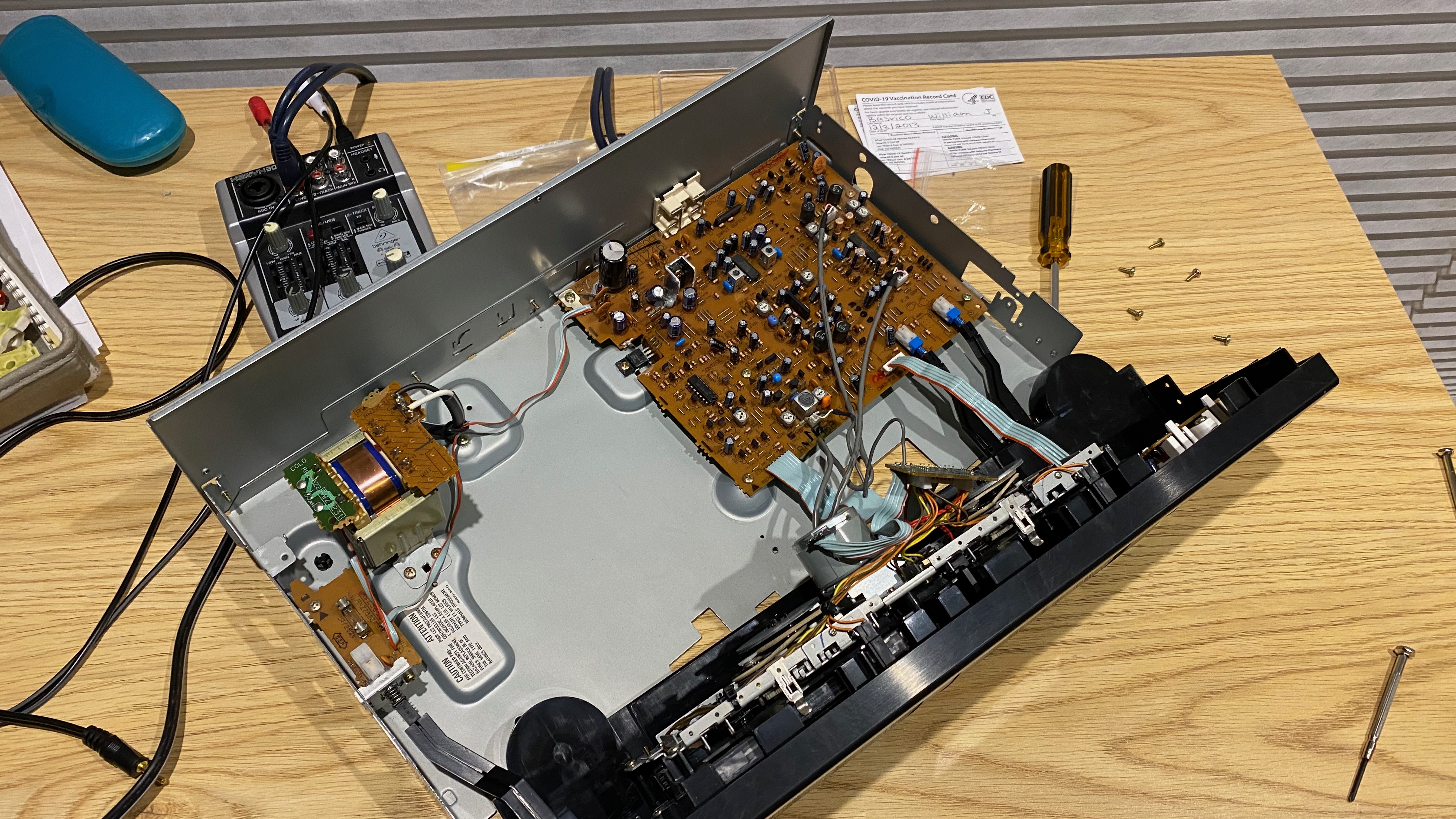 Well, sort of. Sound is coming out of my headphones. My first guess is that the motor is dying, because it sounds slow, but it’s more than that. I go deep down the rabbit hole of Wow & Flutter. Tape decks have a number of ways to adjust the speed of the motor and adjust the sound quality and volume of each channel. I spend far too long listening to an old tape I recorded off the radio in the 90’s to discover that a rubber band is too stretchy to be used in a tape deck. The band stretches out, then pulls quickly, then slows down with the next stretch creating a very odd under water sound. 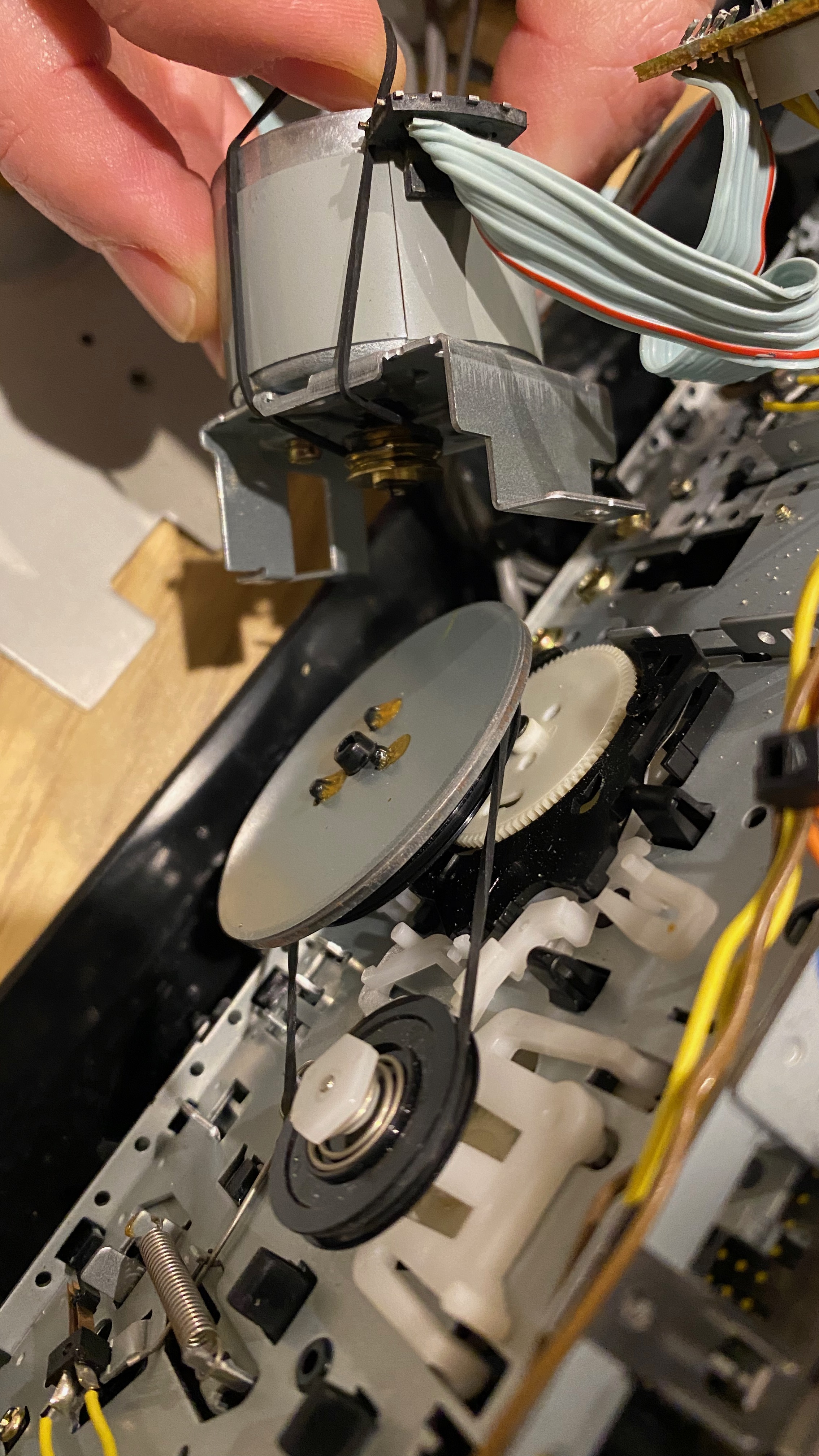 The next phase of, what has become, Joe’s mixtape odyssey, is to buy new (real) tape belts. Luckily these are pretty easy to come by online. Another week goes by and the new belts arrive. It’s hard to find the right size on a deck you know nothing about, but I find the right ones, install them and pop in the new tape. It sounds pretty good!

My next goal is to make sure the levels and speed are correct. I spend another 20 min listening to Parents Don’t Understand from the tape deck in one ear of my headphones and the same song in the other ear from my iPhone. Using a tiny screwdriver I turn the knobs on the board to adjust the speed, levels, and bias. My nights are spent reading articles from “Sound Talk” a 1968 publication about High Frequency Bias Requirements for Magnetic Tape Recording. At the end of the night after much trial and error I get the playback deck working well. The adjustments have been made and DJ Jazzy Jeff and the Fresh Prince are sounding pretty decent, for an old tape that I’ve been carrying around for 35 years.

Excitedly, I ran to my record player and wired up the repaired tape deck. I recorded a few songs directly from vinyl and it was so much fun! Pressing record and dropping the needle has such a physical quality. I can focus on the actions then I sit there in front of the record player and tape deck listening to the song copy over in real time.

I rewound the tape after recording a few songs, and played it back. Sadly it sounded terrible. I think the old tape motor was failing after all, the power supply was wonky, my belts weren’t great, or were installed improperly. Whatever it was, after two months of trial and error, learning, and repairing it was time to throw in the towel. I bought a new tape deck on Amazon to complete my journey. It was a little disappointing after so many hours of effort poured into my home repairs I really wanted that deck to work, but sometimes it’s important to know when to cut your losses and move forward. 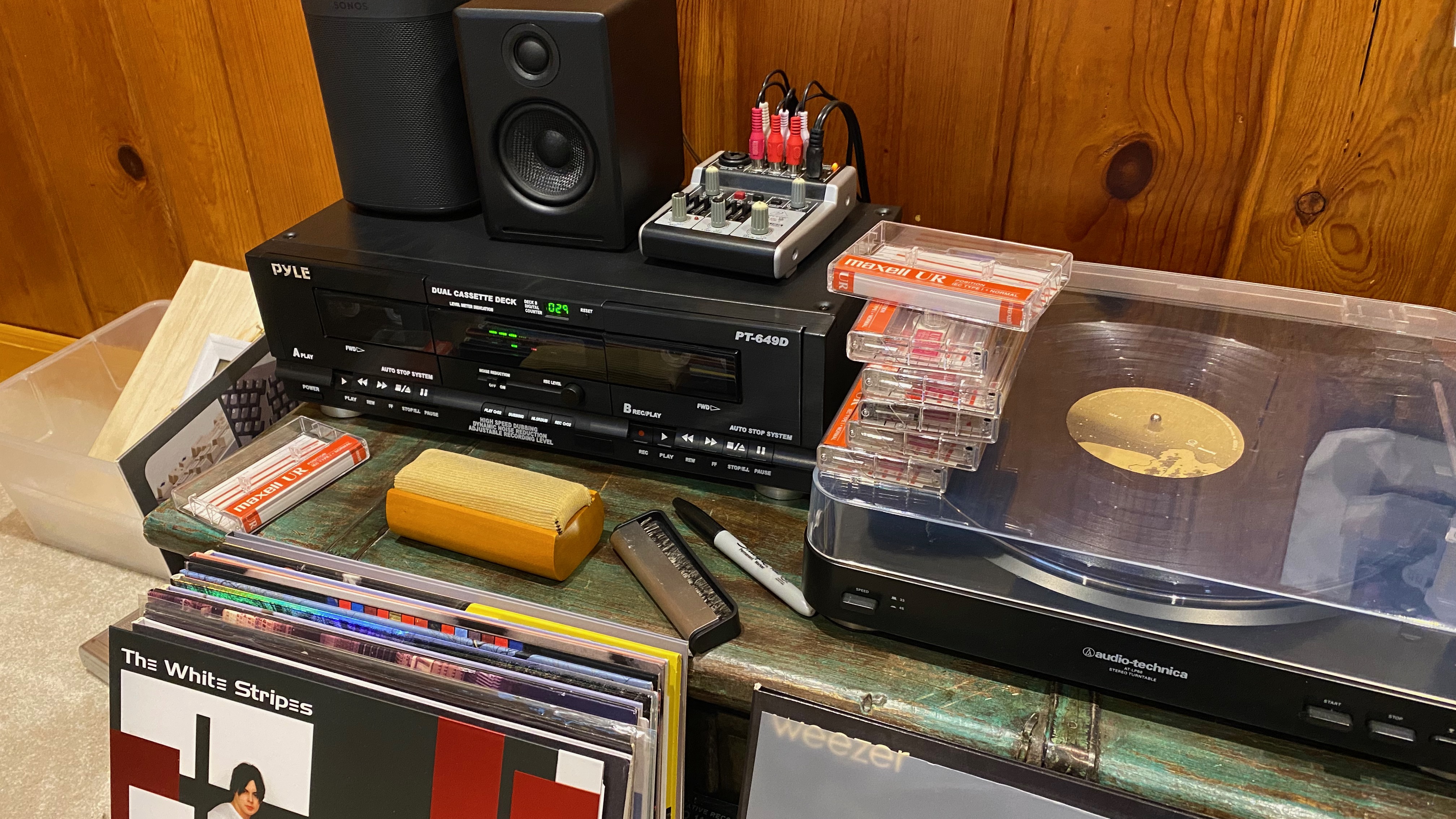 Once the new tape deck arrived in the mail I was off to the races. The next three nights were spent selecting, listening and recording vinyl to tape. Am I going to start sending tapes to my friends instead of digital playlists, no, but making these tapes was everything I hoped.

How does this work?

This process got me thinking about the technology behind vinyl records and cassette tapes. The two are incredible innovations. Clearly the vinyl record has it’s ancestry in Edison’s wax cylinder, from 1877, which took queues from Léon Scott’s Phonautograms, from 1857, which were used to study, but not playback sound. The wax cylinder was unwound into a disk format and many formats, speeds, grooves, and materials were used over the years with their own pros and cons. I have a few very old records that have some odd speeds like an audiobook recording of the Bible that plays at 12 1/2 RPM speed, a paper imprint done by Jack White recording Pusherman that plays at 78RPM, and a single from Bing Crosby on shellac from 1944.

All of these are interesting and unique and bring a thread of history to every song we play. Moving through the history of vinyl makes sense though: sound moves air, that movement can be captured on a medium, and then that medium can be used to make a sound again. You can hear music if you get close enough to the stylus of a record player. If you have a brand new polymer dollar bill, like China and Canada use, you can even amplify that music by dragging the corner of the bill along the records groove (Check out a video of me doing just that).

What about a cassette tape? 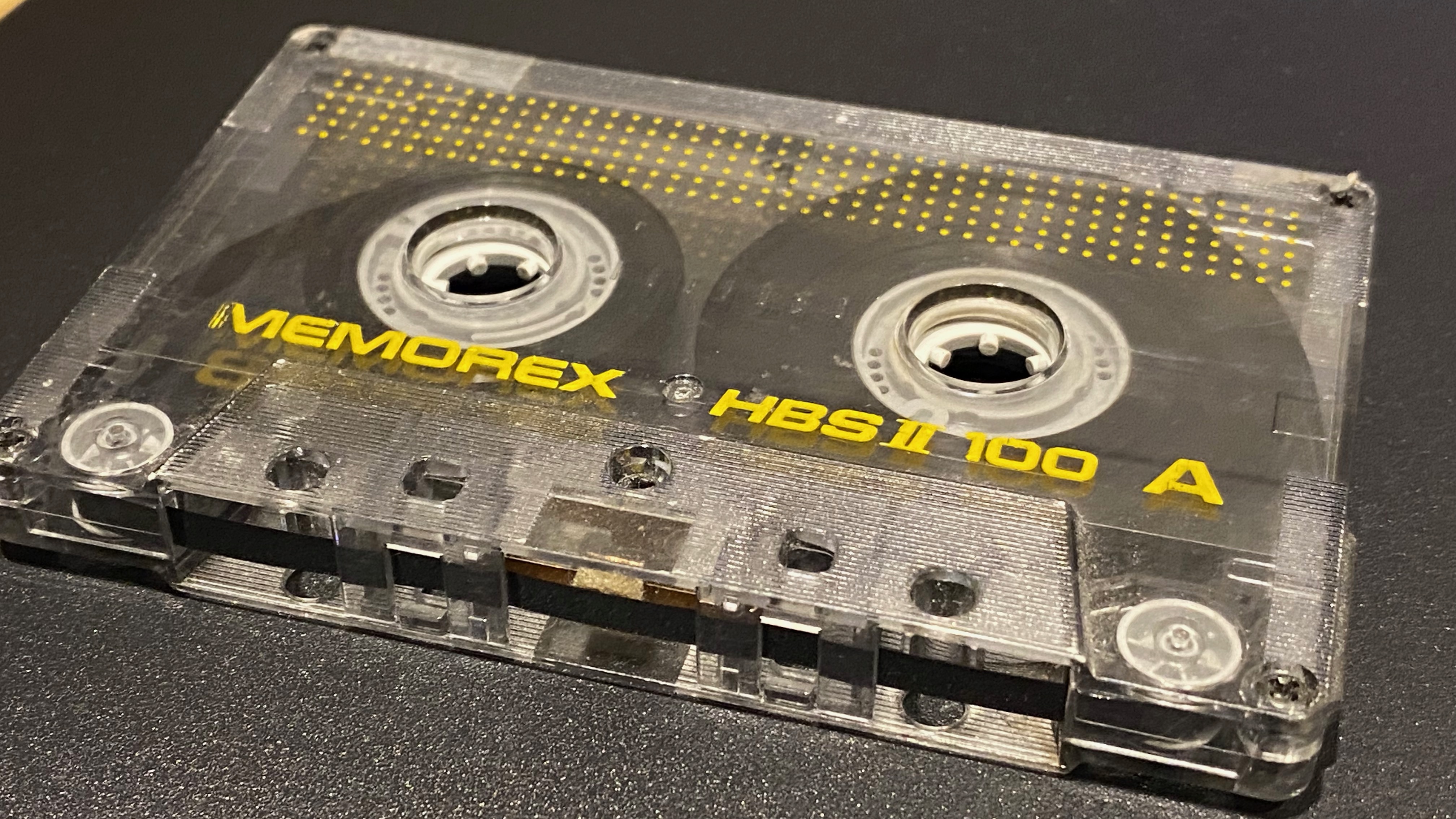 Cassettes are analog too, but instead of creating groves on vinyl the audio information is encoded onto magnetic tape. Early reel to reel magnetic tape recorders were invented about 50 years after Edison’s wax cylinder. This huge leap of innovation is incredible. With magnetic tape there’s no visible change when the audio is recorded, the tape can be recorded and re-recorded, and it’s far more portable and robust than vinyl records. Tapes became hugely popular from the 60’s well into the 90’s, when they were largely replaced by CDs.

Today’s answer is always digital: digital software, digital formats, and digital algorithms. What’s the difference between an MP3 and Apple Spacial Audio? Well, is a different algorithm and format. Want to develop a new format? Write software to do it. There’s massive hidden innovation in this new software, but it doesn’t feel as mind blowing or exciting as buying your first tape or CD after decades of playing an earlier format. From a vinyl record to a magnetic tape to a MiniDisk to a CD, every jump was a thrill.

In the 80’s and 90’s creating mixtapes for friends was huge. The giving and receiving of these tapes was akin to packaging up a time capsule of your life and feelings and sharing it with your closest friends. We’d record music from the radio, other tapes, vinyl, and CD’s when they came around. It became so popular the RIAA started a campaign that warned our taping was “Killing Music!” I was introduced to so many great artists (Lucious Jackson and Belly from one group of friends and Rancid, Black Flag and Germs from another) through mixtapes that it’s hard for me to believe that mixtapes did anything but increase listeners’ world of music.

It’s this practice that I was inspired to recreate. Bringing back the discovery of music, the excitement of matching a song with a friend and taking them on a journey of music you hope they’ll like. Creating a new mixtape from scratch was an epic pilgrimage to the past, but one that I found deeply interesting and fun and one that helped me learn so much about the technologies that shaped the musical landscape of today. I hope it brings a sliver of the excitement to you as it did for me, and maybe it inspires you to create and trade a mixtape or two?

Want to hear the mixtapes? In the first time on planet earth, this one of a kind mixtape has been digitized!